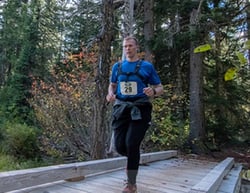 Jensen said. A race volunteer wrapped up a couple sandwiches in a napkin and handed them over.

It was feeding time. After running for a couple of hours along dirt roads and trails in the Mount Hood National Forest, Evan stopped at an aid station. The short break reminded him that staying hydrated and eating enough calories was critical to running 100 miles. He took a sip of Gatorade, finished off a second sandwich, checked his watch, and continued running.

Twenty-eight and a half hours later, he crossed the finish line of the Mountain Lakes 100-Mile Ultramarathon. The achievement required months of training, miles of running, and a never-quit attitude. You don't have to become an ultra-runner. But if you want to improve your health and live longer, the basic strategies are nearly identical.

Get to work. "Decide you want to improve your health, and then do something about it," says Evan. "It took about five months to train for the 100-mile race, and the first training run I completed was only a few miles long."

Start with a goal in mind, like losing weight, lowering your blood pressure, eating more fruits and vegetables, or exercising at least 30 minutes a day. Taking a health risk assessment is a good way to find out what you're doing well and what you can improve. Set a goal and then get to work. You can't sit around and wish things were different or put off taking action and expect things to change. Make the effort to get started, and you'll feel better and begin to see improvements.

Keep trying. "I ran really efficiently for the first 50 miles of the race," says Evan. "But after that, the race became a lot harder. I kept telling myself, 'Run when you can, walk if you have to, and don't give up."

If your goal is to run 100 miles or lose 100 pounds, you can expect to experience struggles along the way. But that's no reason to give up. You've got to keep trying. Simple actions like drinking water instead of soda, replacing some TV time with exercise, or eating more fruits, vegetables, nuts and seeds, legumes, and whole grains, instead of processed foods will pay off. It might be hard at first, but it's worth the effort.

Ask for help. "At about 75 miles, I sat down in a chair at an aid station and said I was feeling pretty tired," says Evan. "But it was like I was pulling into a NASCAR pitstop. People handed me hot soup, mashed potatoes, cold drinks, and more peanut butter and jelly sandwiches. Someone even taped up my heel to ward off a blister. All I had to do was ask, and someone was ready and willing to help."

If you've got a question, or you're feeling stuck when it comes to making healthy lifestyle choices, ask for help. Your healthcare team, wellness coordinator, co-workers, and social network can provide encouragement, hold you accountable, and help you achieve your goal.

Be mindful. "Physical endurance is an important part of ultrarunning," says Evan. "But your mind needs to be just as strong to go the distance. If you dwell on things like doubt or the fear of uncertainty, it will be harder to reach the finish line."

Your health and wellness goals can best be achieved by being mindful of what you want to accomplish. Daily reminders on your smartphone or calendar can help. Tracking your progress with a mobile app or recording your activity in a journal can help you maintain focus on what you want.

"It's a great feeling to set a goal, work hard, and achieve it," says Evan. "I ran about 1,500 miles in training, and during the race I had to fight off fatigue, stomach cramps, and a bad attitude. But it was worth it. If you really want to improve your health, don't put it off. Just get started and you'll be amazed at the results you can achieve."